It was the news heard round the world – or at least around New York City.

Thousands watched on their cell phones as the media called Pennsylvania in favor of former Vice President Joe Biden after that state catapulted him over the vital threshold of 270 electoral votes. Horns honked throughout the city while crowds began gathering in Washington Square Park in Greenwich Village to celebrate the victory.

After one of the most contentious presidential races in history, Joe Biden was elected the 46th President of the United States, along with his running mate, California U.S. Senator Kamala Harris, who made history by becoming the first female Vice President.

Throughout the weekend, ecstatic victory celebrations continued nationwide, a break from the pressure of a stressful and fiercely combative political campaign held during the worst public health and financial crisis in recent history. That night, the President-elect told a crowd of supporters in Delaware, “I pledge to be a president who seeks not to divide but unify. Who doesn’t see red states and blue states, but only sees the United States. Tonight, we’re seeing all over this nation, all cities in all parts of the country, indeed across the world, an outpouring of joy, of hope, of renewed faith in tomorrow, bring a better day. And I’m humbled by the trust and confidence you’ve placed in me.”

Vice President-elect Kamala Harris told the crowd, “Congressman John Lewis, before his passing, wrote: ‘Democracy is not a state. It is an act.’ And what he meant was that America’s democracy is not guaranteed. It is only as strong as our willingness to fight for it, to guard it and never take it for granted.”

This entire campaign was overshadowed by the COVID-19 pandemic, which forced the Democratic ticket to engage in socially-distanced rallies and utilize digital tools to get out their message and for get-out-the-vote efforts (for information on DC 37’s campaign efforts, see page 6).

Many states, including pivotal swing states in the midwest, relied on absentee ballots and mail-in voting in order to keep voters safe and avoid early voting and Election Day crowds. Progressive leaders pitched in to help, including former President Barack Obama who campaigned in several states, including Florida and Michigan, and U.S. Senator Elizabeth Warren. 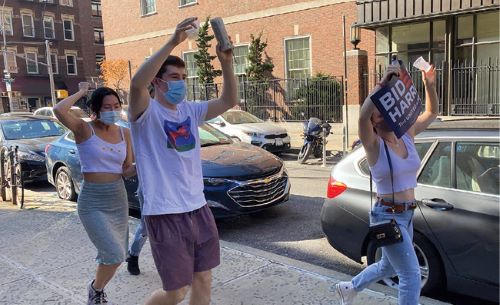 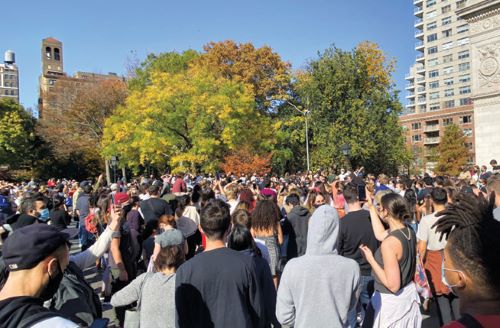 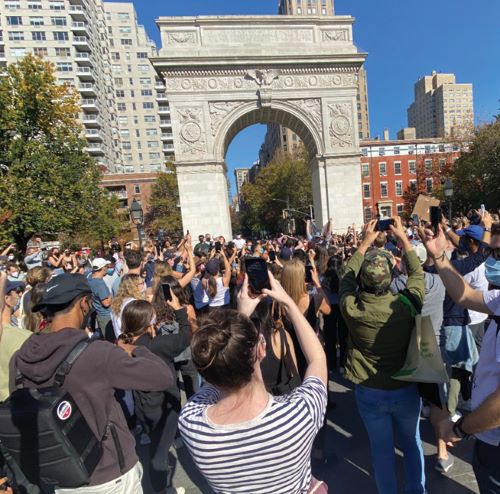 A strong media presence helped push the campaign high in the polls despite the limitations on traditional political campaigning. On Election Day, tens of millions of registered voters, predominantly Republicans, came out to the polls. In the early returns—as was expected—President Trump led in several important states.

But millions of mail-in and absentee ballots in favor of the Biden-Harris ticket proved key as election workers across the nation carefully counted—in some states for nearly a week—the votes that proved decisive in victory. The nation was pensive as votes first whittled down Trump’s lead, and one-by-one, first with Wisconsin, then Michigan, Biden flipped several states to the Democratic column, and closed in on others.

But four days after Election Day, Pennsylvania put the Democratic challenger over the top. Later, Georgia and Arizona also fell to the Democrats. In sheer numbers, it was the highest turnout for a Presidential election, and with 80 million votes, the Biden-Harris campaign garnered the most votes ever in an American election, a decisive win.

President-elect Joe Biden has devoted more than a half-century to public service. Born and raised in Scranton, Pennsylvania, he was elected in 1972 as U.S. Senator from Delaware. He was Chair of the Foreign Relations Committee but is most known for his role on the Senate Judiciary Committee, leading efforts to pass important legislation such as the Violence Against Women Act. He was a powerful opponent of the Reagan-Bush era U.S. Supreme Court nominations of both Robert Bork and Clarence Thomas.

He resigned his Senate seat to run as Vice President with President Barack Obama’s historic campaign in 2008, and ably served President Obama for two terms, using his influence in the Senate to help pass landmark legislation, particularly the Affordable Care Act, 2010.

Biden said his goal in running for President was to unify the country after the divisive years of the Trump administration. “I sought this office to restore the soul of America, to rebuild the backbone of this nation, the middle class, and to make America respected around the world again. And to unite us here at home,” he said.

Vice President-elect Kamala Harris, born in 1964, is the child of a South Indian mother and Jamaican father. She was elected as District Attorney in San Francisco in 2003. Beginning in 2010, Harris served two terms as the state’s Attorney General before being elected Senator in 2016. Harris was noted for her fierceness on the Judiciary Committee during the hearing on U.S. Supreme Court Justice Brett Kavanaugh in 2018.

She ran for President in the Democratic Party campaign earlier this year but withdrew before the Iowa caucus. She was named as Biden’s running mate on Aug. 11 and will serve as the highest-ranking female elected official in American history, and the first Woman of Color Vice President.

“America looks forward to a forward-thinking administration whose top priorities will be COVID-19 relief and fair and equitable economic recovery efforts, especially in funding the frontline workers and communities that have suffered from the pandemic,” said DC 37 Executive Director Henry Garrido.

“The incoming Biden administration has promised to reverse the hurtful policies the Trump administration implemented against workers and immigrants and we plan to hold him to that,” Garrido said.