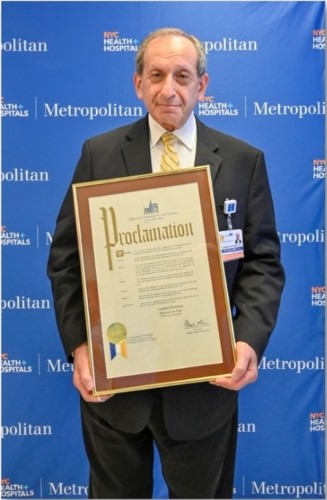 Local 1189 NYC Psychologists President Dr. Leonard Davidman received a big surprise back in April when he received a proclamation declaring “Leonard Davidman Appreciation Day” in the Borough of Manhattan for his 50+ years of public service at NYC Health+Hospitals.

“I was surprised and appreciative to get this, but a little embarrassed simultaneously,” he said upon receiving the proclamation at work during a surprise honor.

“This award is both humbling and wonderful,” Dr. Davidman said.

He learned that the head of Metropolitan Hospital’s Human Resources April Alexander and the hospital leadership had applied to the Borough President’s office to request the proclamation — and it was approved without question.

“I do much work and take on leadership roles outside the union, too, for all psychologists in all types of settings throughout the state, not just for New York City,” he said.