Our union, our power 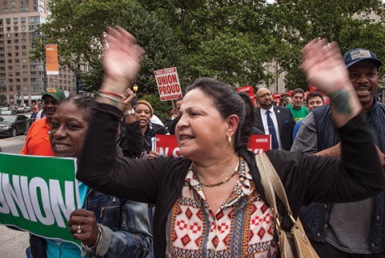 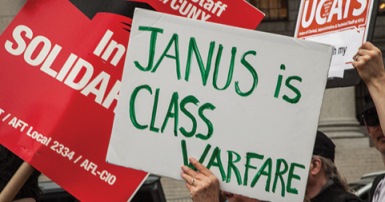 Capping what was perhaps was its most contentious and partisan session in modern history, the U.S. Supreme Court ruled 5-4 to overturn precedent and establish so-called “right-to-work” in the public sector nationwide.

The decision in Janus is the latest in a series of outrageous court, legislative and administrative actions pushed by a cabal of anti-union extremists to define the rules of the nation’s economy even more in favor of the 1 percent by trying to weaken the power of unions.

“Our lives will not be determined by a Supreme Court decision,” he said. “It is the desire of working people to stand up and collectively say we are stronger together and that in unity is our power. We shall not be stopped.”

Later that afternoon, city unions joined together in a massive demonstration at Foley Square in lower Manhattan.

By no longer collecting from free-riding ‘agency fee payers’ — workers who do not belong to the union but enjoy the benefits negotiated on their behalf – this decision impinges on the ability of public workers to maintain their hard-won freedoms and the benefits they have negotiated collectively.

And with anti-union lawyers in charge of the National Labor Relations Board, the labor movement will march on a much tougher road. 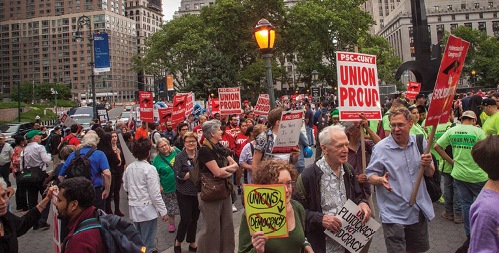 Organize and keep on pushing

But DC 37 is in a strong position to blunt this anti-union onslaught and continue providing services and benefits for its members.

Years before the Janus ruling, DC 37 began an intensive effort to protect workers’ rights by strengthening the union.

Tens of thousands of former “agency fee” payers have signed membership cards after participating in town hall meetings, workplace meetings and one-on-one contacts with union representatives. Now, District Council 37 has the largest number of membership cards on file in its nearly 75 years of existence — and fewer non-members than ever before.

“Our members have responded,” said Garrido. “They are rejecting this assault on their freedoms and reaffirming their commitment to their union.”

The unstoppable power of DC 37 is reflected in the fact that just the day before the Janus ruling, the union negotiated a contract with the city that provides for substantial raises and maintains our health insurance and other benefits (see NO GIVEBACKS!).

Members stand up for our union